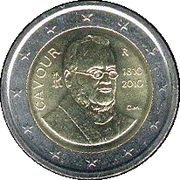 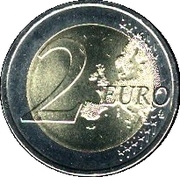 200th Anniversary of the Count of Cavour’s birth

The coin commemorates the 200th anniversary of the birth of Camillo Benso, Count of Cavour (1810-1861), a key figure in Italian unification and early Italian liberalism, and the founder of the political newspaper "Il Risorgimento". It features a portrait of Cavour based on a painting by Francesco Hayez from 1864. The coin’s outer ring bears the 12 stars of the European Union.