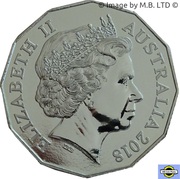 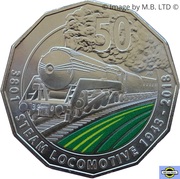 Released in a large Coincard by the RAM this 50 cent NCLT coin commemorates the 75th anniversary of famous Australian Steam Locomotive "3801" entering service in 1943.

After a decade long absence and lengthy restoration, 3801 will return to heritage operations with the NSW Rail Museum in 2018. 3801 evokes a bygone era of train travel and is an icon of Australian transport beloved by train enthusiasts of any age. The sight and sound of 3801 always attracts large numbers of people keen to travel on it or watch it speed by.