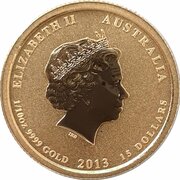 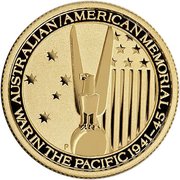 Southern Cross to the left, Eagle in the Middle, Stars and Stripes to the right.

Lettering:
AUSTRALIAN/AMERICAN MEMORIAL
P
WAR IN THE THE PACIFIC 1941-45

A member of this site wants to exchange it: castle.huyghe

Bullion value: 178.06 USD Search tips
This value is given for information purpose only. It is based on a price of gold at 57,261 USD/kg. Numista does not buy or sell coins or metal.