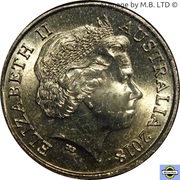 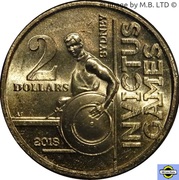 Side view of Invictus Athelete in sporting wheelchair

Released into circulation initially by the RAM at Brisbane & Sydney coin swaps on 23/7/2018 is this $2 commemorative circulation coin. It commemorates the 4th Invictus Games to be held in Sydney between 20-27 October 2018.

The coin was also issued in an unofficial coincard.

The Invictus Games are an international adaptive multi-sport event for wounded, sick and injured service personnel. The Games were created in 2014 by Prince Harry, who was inspired after he attended a similar event for wounded veterans in the United States a year earlier.

As for the name, "Invictus" means "unconquered".