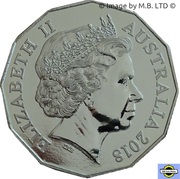 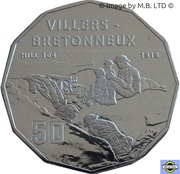 The Royal Australian Mint is producing a series of NCLT 50 cent coins to commemorate the Battles of the Western Front that Australian soldiers took a major part in during WW1. They are released on a coincard.

This 2018 coin relates to the action on 24th April 1918 by Australian troops of the 13th & 15th Brigades who were rushed south from Belgium towards Amiens in France to make a highly successful night-time assault on the German positions to recapture the town of Villers-Bretonneux. From Villers-Bretonneux, the allies launched their own counter offensive which ultimately brought an end to the fighting on the Western Front.