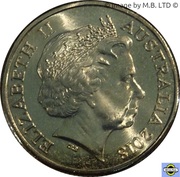 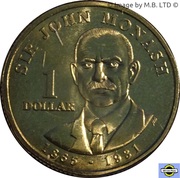 The Royal Australian Mint released this NCLT 1 Dollar  coin to commemorate the life of Scholar, Engineer, Soldier & Nation Builder, Sir John Monash . It was released on a coin card.

Sir John Monash is one of the greatest figures in Australian History. A brilliant tactician, he was one of the outstanding commanders of the First World War and was knighted for his services in 1918.

As an engineer prior to the war, Monash introduced the use of reinforced concrete into Victoria.
After the war he became chairman of the State Electricity Grid of Victoria.
Later he was appointed as Vice-Chancellor of the University of Melbourne.

The coin was also issued by Australia Post in a PNC. (7,500 Copies)

A member of this site wants to exchange it: MMowiec