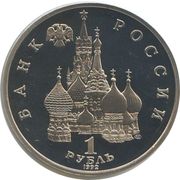 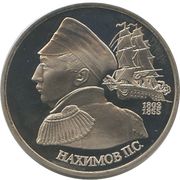 The 190th Anniversary of the Birthday

In the center of the disc - the relief image of cupolas of the Intercession Cathedral on the Moat on the Red Square and Spassky Tower of the Moscow Kremlin, to the left above – the two-headed eagle with wings down, under the cathedral to the right - the mint trade mark, at the bottom in the centre, in three lines – the denomination and year of issue: "1 РУБЛЬ 1992" (1 RUBLE 1992), along the rim – semicircular inscriptions, to the left: "БАНК" (BANK), to the right: "РОССИИ" (OF RUSSIA).

In the centre of the disc - the relief profile portrait of Admiral P.S. Nakhimov in a military uniform, under it – the semicircular inscription: "НАХИМОВ П.С." (NAKHIMOV P.S.), to the right above - a sailing ship, under it in two lines – dates: "1802" and "1855".

Pavel Stepanovich Nakhimov (1802-1855) - a Russian naval commander, admiral. During the Crimean war (1853-1856), he commanded the squadron that routed the Turkish fleet in the Battle of Sinop (1853). Since February 1855 Nakhimov was appointed the Commander of the port of Sevastopol and the Military Governor. He was fatally wounded on Malakhov Mound on June 28, 1855, and was buried in Saint Vladimir Cathedral in Sevastopol.