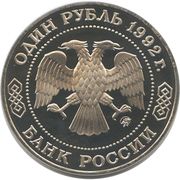 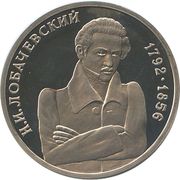 The 200th Anniversary of the Birthday

In the center of the disc, in the circle of dots - the Emblem of the Bank of Russia (two-headed eagle with wings down), under it to the right - the mint trade mark, along the rim – semicircular inscriptions divided by two fragments of ornament, on top – the denomination and year of issue: "ОДИН РУБЛЬ 1992" (ONE RUBLE 1992), at the bottom: "БАНК РОССИИ" (BANK OF RUSSIA).

In the centre of the disc – the relief portrait of N.I. Lobachevsky with arms folded on the chest, along the rim – semicircular inscriptions, to the left: "Н. И. ЛОБАЧЕВСКИЙ" (N. I. LOBACHEVSKY), to the right - dates: "1792-1856".

Nikolai Ivanovich Lobachevsky (1792-1856), a Russian mathematician, is known as the creator of non-Euclidean geometry. From 1827 to 1846 he used to be the Chancellor of the Kazan University. Lobachevsky's discovery of 1826 (published in 1829-1830), ignored by his contemporaries, was a breakthrough in the understanding of the nature of space, which for more than 2000 years had been based on Euclid's assumptions, and had a tremendous impact on the development of mathematical thinking. Lobachevsky wrote works on algebra, mathematical analysis, the probability theory, mechanics, physics and astronomy.