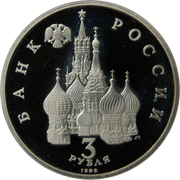 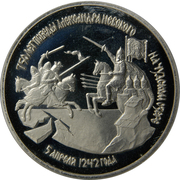 750th Anniversary of the Victory of Alexander Nevsky at Chudskoye Lake

In the center of the disc - the relief image of cupolas of the Intercession Cathedral on the Moat on the Red Square and Spassky Tower of the Moscow Kremlin, to the left above – the two-headed eagle with wings down, under the cathedral to the right – the mint trade mark, at the bottom in the centre, in three lines – the denomination and year of issue: "3 РУБЛЯ 1992" (3 RUBLES 1992), along the rim – semicircular inscriptions, to the left: "БАНК" (BANK), to the right: "РОССИИ" (OF RUSSIA).

In the centre of the disc – the relief depiction of fighting scene between Russian worriers and German knights on cracking ice, along the rim - circular inscriptions in Old Slavonic style, at the top: "750 ЛЕТ ПОБЕДЫ АЛЕКСАНДРА НЕВСКОГО" (THE 750th ANNIVERSARY OF ALEXANDER THE NEVSKY'S VICTORY), to the right: "НА ЧУДСКОМ ОЗЕРЕ" (ON CHUDSKOE LAKE), at the bottom: "5 АПРЕЛЯ 1242" (ON APRIL 5, 1242).

Translation:
The 750th Anniversary of Alexander the Nevsky's Victory on Chudskoe Lake
ON 5 April 1242

Alexander Yaroslavich (1220-1263), a Novgorod prince, the Grand Duke of Vladimir and son of Prince Yaroslav Vsevolodovich, for the victory over the Swedes on the Neva River in 1240 was named Alexander the Nevsky. On April 5, 1242, Russian warriors led by Alexander the Nevsky routed the German knights on ice-bound Chudskoe Ozero. That fight, which went down in history as the Battle on the Ice, allowed Russia to strengthen its western borders. Alexander the Nevsky was canonized by the Russian Orthodox Church.