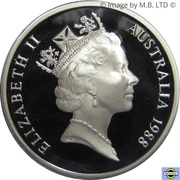 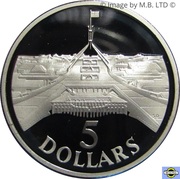 Image of New Parliament House in Canberra with the Australian Flag flying high above.

This Sterling Silver (.925) NCLT Proof coin was issued by the RAM (19,999 Sets) as part of the 1988 Bicentennial Masterpieces in Silver Set with three other Sterling Silver Proof coins. 5000 Sets were also released at the Sydney Coin Fair with a specially printed wrap around ribbon. 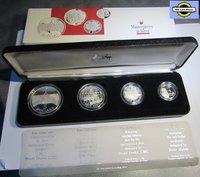 Three million Aluminium-bronze versions of this $5 coin were also commissioned and distributed by the Commonwealth Bank in folders at face value in 1988 in celebration of the opening of the New Parliament House. A Proof version of the Aluminium-bronze coin was also sold in a plush square box.

Bullion value: 29.11 USD Search tips
This value is given for information purpose only. It is based on a price of silver at 879 USD/kg. Numista does not buy or sell coins or metal.