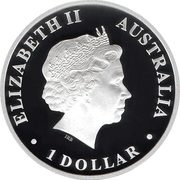 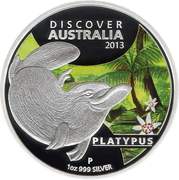 A platypus against a coloured tropical rainforest scene.

Released by the Perth Mint in 2013 this coin is the part of Second Series of Discover Australia Fine Silver (.999) Silver coins. The coin was released individually and as part of a Five coin Set.