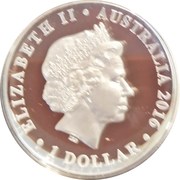 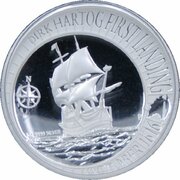 Depiction of a view through a telescope of Dirk Hartog's ship, the Eendracht, sailing the ocean alongside a compass rose. With a map of Australia on the right edge.

Technical Note: The coin's high relief reverse and obverse are minted on concave surfaces to ensure the optimum flow of metal is achieved by the strike of the die.