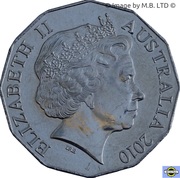 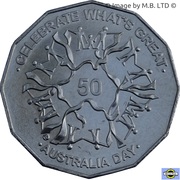 Celebrating Australia Day in 2010 the Royal Australian Mint in collaboration with the Australia Day Council has released this commemorative cupro-nickel 50c coin into circulation. It wasn't until as recently as 1994 that the whole of Australia has consistently celebrated Australia Day on the 26th of January as a public holiday. It was on the 26th January 1788 that The First Fleet from England commanded by Captain Arthur Phillip landed at Sydney Cove and raised the Union Jack Flag founding the Colony of New South Wales.
The coin was available in specially wrapped rolls.