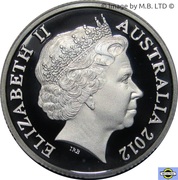 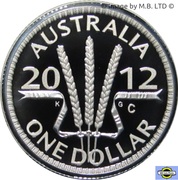 This Fine Silver (.999) NCLT Proof coin was issued by the RAM in a capsule inside a plush square black case with a numbered certificate. The coin commemorates the Australian Wheat Industry and replicates the design that adorned the tiny 16mm pre-decimal silver threepence from 1938 to 1964. The coin included a "C" for Canberra Mintmark.