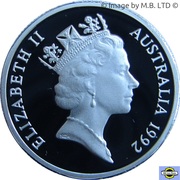 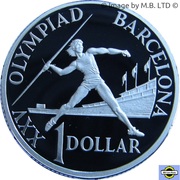 This is the silver proof version of the Aluminium-bronze coin issued as a NCLT coin by the RAM to commemorate the Summer Olympic Games (the XXVth Olympiad) which were held in Barcelona, Spain in 1992. It was issued for general sale in a capsule in a plush square case with interrupted reeding and also in a plush long box at the Sydney International Coin Fair held on 21-22 March 1992, with an exclusive continuous reeding edge design. 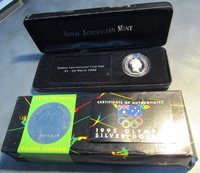 The Aluminium-bronze coin was issued without a mintmark but was available in a number of varying packages. It was available at the Mint your Own Gallery Press at the RAM for $2 when you visited Canberra. It was issued in a wallet depicting the RAM building. These were then replaced by wallets with a picture depicting the Olympic rings.

Bullion value: 9.07 USD Search tips
This value is given for information purpose only. It is based on a price of silver at 867 USD/kg. Numista does not buy or sell coins or metal.