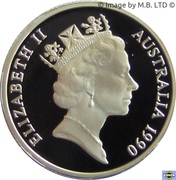 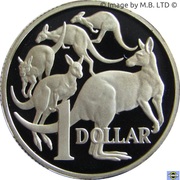 This Silver (.925) Proof $1 MOR coin was released by the RAM as part of the 1990 "Masterpieces in Silver - One Dollar Collection" set, along with two other silver proof one dollar commemorative coins. The set also included a 1 ounce Silver bar designed to resemble an Australian One Dollar Note.

The exact same coin was also released by the RAM as part of the 1991 1991 "Masterpieces in Silver - Eight coin Circulation" Set, this set commemorated the 25th anniversary of the introduction of Decimal Currency. This was the first complete set of Australian circulating coins released in sterling silver and the first sterling silver releases of Australian one, two, five, ten and twenty cent coins. 1991 was also the last year of one and two cent circulating coin production in Australia.

Both dates of the coin were also produced in limited quantities for the ANDA Sydney Coin Show in the respective years.

Bullion value: 9.43 USD Search tips
This value is given for information purpose only. It is based on a price of silver at 887 USD/kg. Numista does not buy or sell coins or metal.