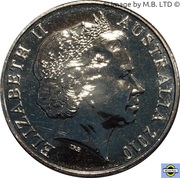 Australian Soldier carrying an injured Soldier over his shoulder

his NCLT 20 cent coin was released by the RAM in a large coincard. It is the second coin in a series of  seven "Australia Remembers" 20 cent coins.

This coin commemorates the Lost Soldiers of Fromelles. Known as Australia's bloodiest day, the 1916 Battle of Fromelles took 5533 Australian casualties, including 1917 lives. Ninety two years after the battle, a mass grave of 250 British and Australian Soldiers was discovered near Pheasant Wood. After an identification process, our lost soldiers were laid to rest with dignity and full military honours.