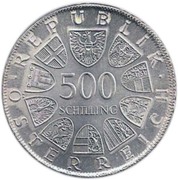 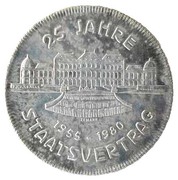 25th Anniversary of the State Treaty

Value within circle of shields (on top Austria, and around the 9 federal states).

Edwin Grienauer was an Austrian sculptor and medalist. He was born and died in Vienna.

View of the Belvedere palace, Vienna.

The Austrian State Treaty, was signed on 15 May 1955 in Vienna at Belvedere Palace by representatives of the allied occupying powers USA, Soviet Union, France and Great Britain as well as the Austrian Federal Government and officially came into force on 27 July 1955.

Members from this site want to exchange it: coincollect, Sneijder

Bullion value: 12.74 USD Search tips
This value is given for information purpose only. It is based on a price of silver at 829 USD/kg. Numista does not buy or sell coins or metal.