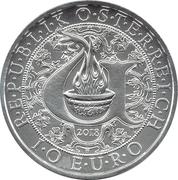 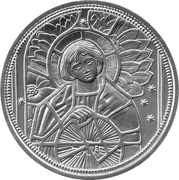 "U" (Uriel) in form of stylised flames and ornate brazier, vine motif surrounding.

Uriel as a young man with short hair and a halo. In his hand he holds a stylised sun bearing the word Sol, meaning sun in Latin. Adaptation of depiction of Uriel on a stained-glass window in the Church of St Mary, in Mortenhoe

Austrian mint information:
Guardian Angels - Someone to watch over you
Through the ages and across many faiths, people have looked to angels for protection. Worshipped by Christians, Jews and Muslims alike, these benevolent but invisible spirits have been widely depicted throughout art history. This has been the inspiration for the design of the four superb coins in our talismanic Guardian Angels series, which feature the angels Michael and Gabriel in 2017 and Raphael and Uriel in 2018. Not only superbly crafted little pieces of art history.

The only angel in the Austrian Mint’s interfaith Guardian Angels series not recognised as an archangel by the Roman Catholic church, Uriel, the subject of the fourth coin, comforts us in dark moments, gives us energy and helps us find the joy in life.

Meaning ‘the light of God’ or ‘God is my light’ in Hebrew, Uriel is symbolised on the coin’s obverse in the form of stylised flames that leap from an ornate brazier framed by the letter U. The coin’s reverse features an adaptation of a depiction of Uriel on a stained-glass window in the Church of St Mary, in the village of Mortenhoe, Devon, south-west England. Made by Selwyn Image (1849-1930) around 1890, the window shows Uriel as a young man with short hair and a halo. In his hand he holds a stylised sun bearing the word Sol, meaning sun in Latin.

A member of this site wants to exchange it: smotarib

Bullion value: 13.71 USD Search tips
This value is given for information purpose only. It is based on a price of silver at 881 USD/kg. Numista does not buy or sell coins or metal.