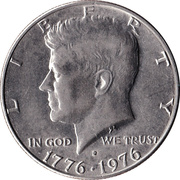 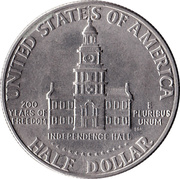 Bicentenary of the United States Declaration of Independence 1776-1976

Translation:
UNITED STATES OF AMERICA
200 OUT
YEARS OF OF MANY
FREEDOM ONE
SGH
INDEPENDENCE HALL
HALF DOLLAR

The American Revolution began in 1776, and this coin commemorates the 200th anniversary of the U.S.' independence in 1976 (also known as the American Bicentennial), a widely celebrated event. All quarter dollars, half dollars, and dollars were struck with a special obverse for during 1975 and 1976, and were the first of America's "modern" circulating commemoratives, and are currently also the only circulating commemoratives to not to be part of a long multi-year series, then followed by the state quarters.