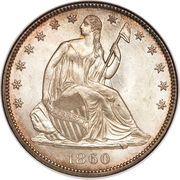 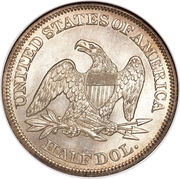 Seated Liberty looking right above her shoulder, with a cap on a stick and a shield, 13 stars around

Eagle with arrows and olive branch in talons

The standard weight of these coins was 192 grains. 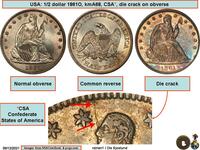 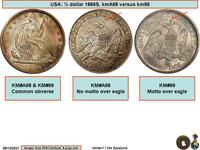 Information about the 1861-O half dollar:
2,532,633 half dollars were struck in the New Orleans, Louisiana Mint in 1861, using dies prepared by the Philadelphia Mint and sent to New Orleans in December 1860. Only 330,000 were struck while the New Orleans Mint was under the control of the United States of America (USA) government (in January 1861).  Another 1,240,000 were struck after Louisiana left the Union (USA), but before they joined the Confederate States of America (CSA). At least one source has indicated that they were struck with the approval/permission of the CSA Government. 962,633 were struck after Louisiana joined the CSA.  Since the coins were struck with U.S. Mint dies, to the standards of USA coins (and using the same staff that had worked for the Mint under USA control), the USA decided to permit the coins to remain in circulation after the Civil War (war between the USA and the CSA).  A sequence of die usage has been researched, which indicates which coins were struck under USA control. On average, only 1 of 8 pieces was minted for the USA. One obverse die used while the New Orleans Mint was operating under the CSA government had a die crack running from Liberty's nose to the edge.  Coins with this crack can be positively attributed to the CSA. This die was also used for one side of the Confederate shield half dollars.

Bullion value: USD 6.99 Search tips
This value is given for information purpose only. It is based on a price of silver at 624 USD/kg. Numista does not buy or sell coins or metal.