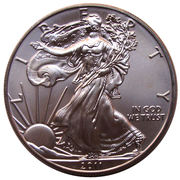 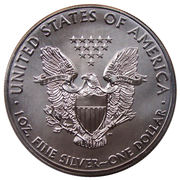 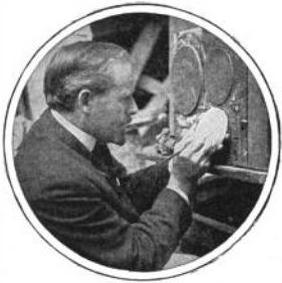 Translation:
United States of America ·
OUT OF MANY, ONE
JM
1 oz. Fine silver ~ ONE DOLLAR


OBVERSE
-The L in LIBERTY has an angled feature to the foot rather than two straight lines forming the letter. The foot of the letter is also shorter than prior years.
-The E of LIBERTY is also quite different in that the center portion extends to be in line with the upper extension of the letter. On prior years, the center stem does not extend to the length of the upper stem.
-The G of GOD has no serif.
-The U of TRUST as well as the U of UNITED on the coin’s reverse. On the 2008 issues the U is shaped as a small case “u” would be. That is, it shows the down stroke on the right side of the letter.
-The date is much smaller

REVERSE
-The stars appear flatter, slightly larger and closer together
-The letters of 1 OZ. FINE SILVER ~ ONE DOLLAR are all taller and actually sit closer to the rim than in previous years.
-The tilde, ~, is also markedly different in shape than on prior years’ issues