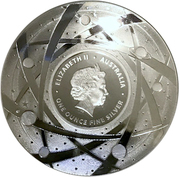 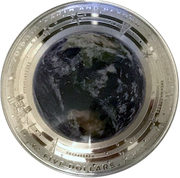 4th portrait of Queen Elizabeth II facing right wearing the Girls of Great Britain and Ireland Tiara surrounded by planets of solar system. This side is concave.

Ian Rank-Broadley FRBS is a British sculptor who has produced many acclaimed works, among which are several designs for British coinage.
Aaron Baggio is a designer with the Royal Australian mint.

Colorized image of the Earth as seen from space with date above and denomination below. Names of atmospheric layers around Earth. This side in convex.

First in The Earth and Beyond Silver Domed coin series features our beloved home planet, the Earth. The beauty of our planet is displayed in a convex shape, giving a realistic look to the coin. Our planet Earth was thought to have formed around 4.54 billion years ago, with the first photograph of the full view of Earth taken on December 7, 1972. That famous photograph, called the "Blue Marble" was taken as the Apollo 17 crew left Earth's orbit for the moon, and shows a captivating view of the Earth.

Bullion value: 28.26 USD Search tips
This value is given for information purpose only. It is based on a price of silver at 910 USD/kg. Numista does not buy or sell coins or metal.