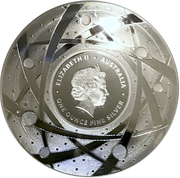 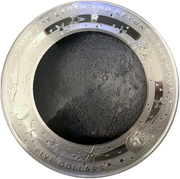 The Earth and Beyond

Effigy of Her Majesty Queen Elizabeth II with weight below surrounded by planets of solar system. This side is concave.

Ian Rank-Broadley FRBS is a British sculptor who has produced many acclaimed works, among which are several designs for British coinage.
Aaron Baggio is a designer with the Royal Australian mint.

Detailed image of the Moon with date above and denomination below

Lettering:
2019
THE EARTH AND BEYOND - THE MOON
FIVE DOLLARS

Second in The Earth and Beyond Silver Domed coin series features the Moon, our closest celestial companion. This release follows the popular release of the first coin in the series, the Earth Domed coin earlier in the year. The Moon has inspired art, literature, navigation and science for thousands of years, but still holds an aura of mystery and awe for the beholder.

Bullion value: 18.09 USD Search tips
This value is given for information purpose only. It is based on a price of silver at 582 USD/kg. Numista does not buy or sell coins or metal.