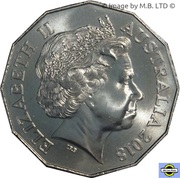 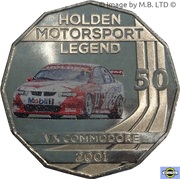 Pad Printed depiction of a 2001 VX Commodore.
Text above and below. Denomination to the right, superimposed on racing lines. 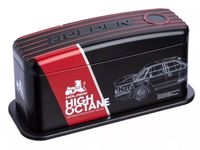 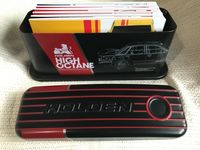 This particular coin is the seventh in the series and commemorates the 2001 VX Commodore. This Holden was so successful and so loved by its driver Mark Skaife, that it was nicknamed 'The Golden Child". Known as chassis 'HRT 045', its debut in September 2001, in Queensland, drew plenty of interest given the car's $25,000 steering wheel-mounted dash display, unseen in other cars of the era. The car ended up driving its way into the history books by winning Bathurst that year and backed it up a year later to score a second win in succession for the Holden Racing Team at Mount Panorama. In doing so, it became the second individual car to win multiple Bathursts. By the time its racing career was over, the 2001 Bathurst-winning Holden had written itself into the history books and taken Skaife to the 2001 and 2002 Supercar Championships as well as an impressive 20 race wins.