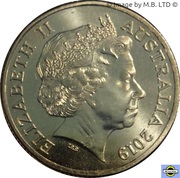 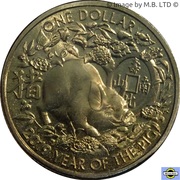 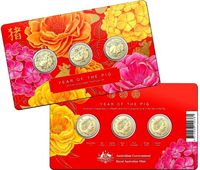 With this set of coins the RAM celebrates 2019, the Lunar Year of the Pig, which is the twelfth and final sign of the Chinese lunar zodiac. Anyone born under this sign are said to be warm-hearted, good-tempered and loyal. Each design features a happy pig with a Chinese coin depicting either Fu (Happiness), Lu (Wealth) or Shou (Longevity), and surrounded by lucky hydrangea blooms.

This particular coin in the three coin set features the Happy Pig crouching with the Chinese Cash Coin for Shou (Longevity).