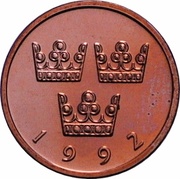 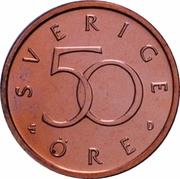 Three crowns - symbol of Sweden - with the year of issue underneath.

On the reverse is the figure 50. Above the figure is the text SVERIGE and below is the text ÖRE. Right of ÖRE is the mintmark while at left there is the first letter in the surname of the Governor of the Riksbank.