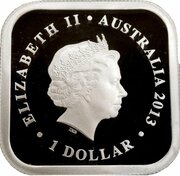 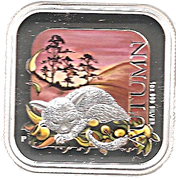 An Australian possum against the background of an autumn bush (gumnuts and leaves) sunset.

Second coin issued as part of a set of four. Autumn in the southern hemisphere takes place in March, April and May.

Bullion value: 28.09 USD Search tips
This value is given for information purpose only. It is based on a price of silver at 903 USD/kg. Numista does not buy or sell coins or metal.