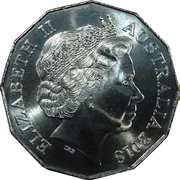 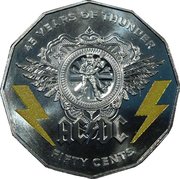 Released in a coin card by the RAM this 50 cent NCLT coin commemorates 45 Years of the Australian rock band AC/DC. Proving to be wildly popular the RAM sold out of these coins in less than three days with a mintage of only 30,000.

Unrelenting, frank, and at times irreverent, the electrifying music of Australia’s premier rock band AC/DC turns 45 in 2018. Bursting into the Australian live music scene late in 1973 these hard-working musicians certainly took the long way to the top and managed to stay there for decades.  This coloured uncirculated coin proudly celebrates the 45th anniversary of Australia's greatest rock band AC/DC.

A special limited mintage (only 10 copies) version of the coin was also issued to lucky buyers of it. The Lightening flash was not pad printed, but added using an actual simulated electrical lightening bolt.