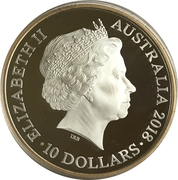 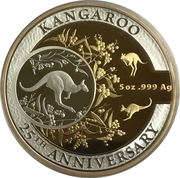 25th anniversary of the Kangaroo Series by Royal Australian Mint.

Features kangaroos from the series' earlier designs. The design also plays homage to the iconic leaping kangaroo displayed on the reverse of the Australian penny from 1937. Wattle is displayed on the coin also. The coin is selectively Gold-plated.

Issued by the RAM in 2018 to commemorate the 25th Anniversary of the iconic Australian Kangaroo Coin. The coin is Selectively Gold Plated on Fine Silver (.999) and was issued in a capsule in a plush case. Mintage limited to 1993 to pay homage to the first year of the Silver Kangaroo Coin minted in that year. (See link)

Bullion value: 131.94 USD Search tips
This value is given for information purpose only. It is based on a price of silver at 849 USD/kg. Numista does not buy or sell coins or metal.