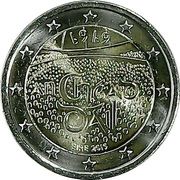 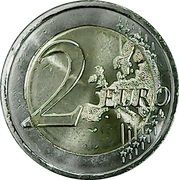 Centenary of the 1st. Meeting of Dail Eireann.

The design depicts the first sitting of Dáil Éireann in the Round Room. The Governance of
the Irish nation began on the 21st of January and the sitting was conducted entirely in the Irish language to mark the
symbolic nature of the meeting. The large Round Room of the Mansion House arcs above the vast congregation of the
nation’s first elected Dáil. The words ‘An Chéad Dáil’, at the centre of the design, together with the year ‘1919’ at the
top, are inscribed in a traditional uncial font. At the bottom are inscribed the name of the country and the year of
issuance ‘ÉIRE 2019’.
The coin’s outer ring depicts the 12 stars of the European flag.