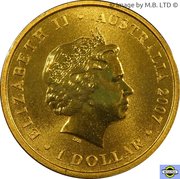 Also issued by the Australian Special Air Service Association in a folder containing  a PNC, a First Day Cover and a postcard. This folder was limited to 2000.

The coin was minted by the Perth Mint and is an NCLT out of normal size $1 coin.