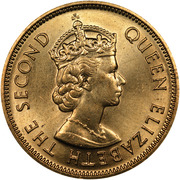 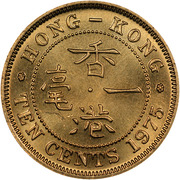 Differs from KM#28.1 in that this coin has no security edge

the 1980 issue was not put into circulation but instead used as decoration for Christmas trees around the territory. As such, most examples will be uncirculated but with residue on one side, usually the reverse. When being graded this is usually accounted for as a part of the history of the coin and therefore not marked as 'details - residue'.