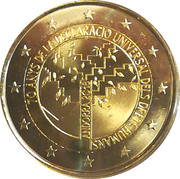 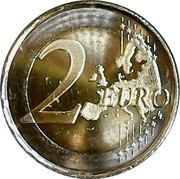 70 years of the Universal Declaration of Human Rights

The design of the coin depicts seven staircases (representing the seven parishes or
administrative divisions of Andorra) in the shape of mountains that lead to the valley, where there is the name of the
issuing country ‘ANDORRA’ and the year of issue ‘2018’. These staircases are, at the same time, the branches of a tree
symbolizing humankind, of which Andorra is an integral part. 30 leaves come out of the branches of this tree
representing the 30 articles of the Universal Declaration of Human Rights.

Translation: 70 years of the Universal Declaration of Human Rights 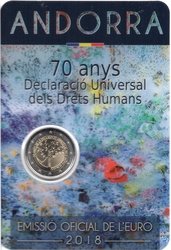