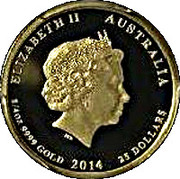 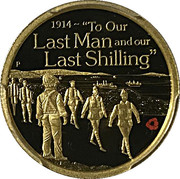 A young boy watching Australian soldiers marching along the Albany coastline, with a convoy of ships in King George Sound in the background. Lettering above, Perth mint mark to left, red coloured poppy to right

The ANZAC Spirit 100th Anniversary Coin Series will be issued annually between 2014 and 2018. In each year of the Series, The Perth Mint will release individual 1oz silver and 1/4oz gold coins portraying major events or themes from the corresponding period 100 years ago. In addition, a 1/2oz Three-Coin Silver Set will be released annually, making a 15-coin collection over five years.
Total of 660 coin sold as of 31 December 2016.

Bullion value: 433.72 USD Search tips
This value is given for information purpose only. It is based on a price of gold at 55,775 USD/kg. Numista does not buy or sell coins or metal.