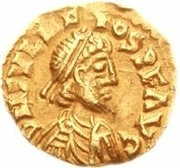 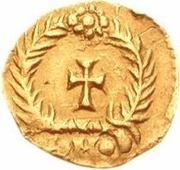 Cross surrounded by wreath with ring above and with legend below.

This is an unpublished piece that was listed under the Uncertain Germanic Tribes by the auction house that sold it (CNG). Even so, the style resembles the tremissis pieces stuck by the Herulian Kingdom, who also issued solidus pieces in the name of Julius Nepos (477-480). With that being said, it seems likely this piece was also an issue of the Herulian Kingdom.

» Buy coins from the Herulian Kingdom