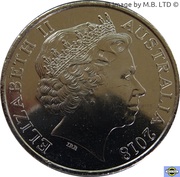 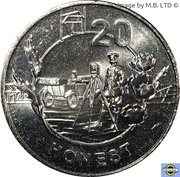 Depiction of Captain James Francis Hurley with Camera
Motor Vehicle in background
Surrounded by a sprig of three poppies on a curved stem
Angular shapes to left, right & top outside inner circle 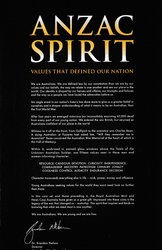 This particular coin refers to the Honest Value. To Charles Bean, Australia's official historian of WW1, photographs were "sacred records" that would allow "future generations to see the plain, simple, honest truth". He valued photography for its documentary role and had little time for overly-dramatized propaganda or staged pictures. Concerned at the absence of authentic photographs of Australians, he commissioned polar explorers Frank Hurley (As depicted on this coin) and Hubert Wilkins as official photographers to the Australian Imperial Force.  The pair took mainly black-and-white images but also made motion pictures and colour plates.