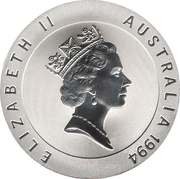 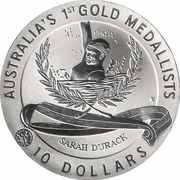 Circle surrounds swimmer within wreath above gold medal, denomination below.

One from a set of six silver coins released by the RAM to celebrate the Olympic sporting achievements of some of Australia's best athletes, The coins were released in pairs, this one was paired with Edwin Flack and was entitled "Olympic Heritage ".