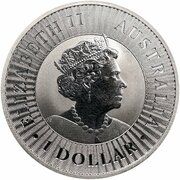 Red Kangaroo facing left in the center. Mint mark to the right.
The date, fineness, and metal at bottom.

This value is given for information purpose only. It is based on a price of silver at 771 USD/kg. Numista does not buy or sell coins or metal.