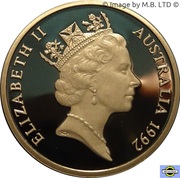 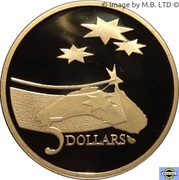 Depiction of the outline of Australia as seen from Space
Superimposed by a stylised version of the stars of the Southern Cross.

This NCLT Aluminium-bronze $5 coin was minted by the RAM in 1992 to commemorate the International Year of Space. The Uncirculated version was released in a coincard.

The Proof version was released in a plush black box with an outer card box. (Above pictures are of a proof coin) 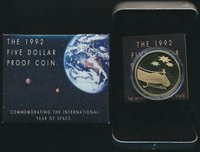 The coin commemorates Australia's invaluable and ongoing role in space technology and research. The reverse design was the result of a nationwide design competition, the winner being John Skillington. The obverse features the Raphael David Maklouf 3rd Portrait of Queen Elizabeth II.

This coin is thicker at 3.5mm and heavier (28g) than later NCLT $5 coins issued by the RAM

The ram also released 2,500 Sterling silver versions of the coin in a plush box.

Members from this site want to exchange it: Essor Prof, akadotour