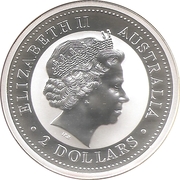 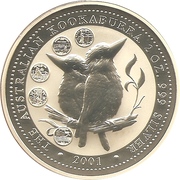 Two Kookaburras back to back on a branch with the Honor Marks of the Third Five States of the United States Mint's 50 State Quarters® Program. New York, North Carolina, Rhode Island, Vermont and Kentucky

The Perth Mint of Australia issued a limited edition two-ounce pure silver Kookaburra coin. Each will feature all five of the state quarter designs issued in 2001.  The Honor Mark 50 State Program from Australia is the first time that US coin designs have been reproduced on foreign coins. The Program has been created with the approval and cooperation of the US Mint. This coin comes with the 5 uncirculated state quarters.

Bullion value: 56.71 USD Search tips
This value is given for information purpose only. It is based on a price of silver at 912 USD/kg. Numista does not buy or sell coins or metal.