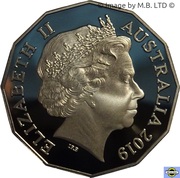 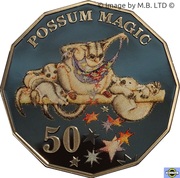 This NCLT commemorative coloured 50 cent coin produced by the RAM is part of the "Possum Magic" six coin Baby Coin Proof set for 2018 & 2019. The set also contains standard 5, 10 & 20 cent UNC Copper-nickel coins and standard $1 and $2 Aluminium-bronze UNC coins. The theme for the Baby Coin set is based on the classic Australian children's book "Possum Magic".

This set, particularly this 50 cent coin,  follows on from the four $1, three $2 and one 1 cent Possum Magic coins released by the RAM in 2017 as part of a promotional release with Woolworths Supermarkets.

The Possum Magic Book was first published in 1983 and is a whimsical picture book written by Mem Fox about two possums, Grandma Poss and Baby Hush, and their travels around Australia sampling food in their quest to make Hush visible again after he was made invisible by the magic of Grandma Poss.
This particular coloured proof 50 cent coin depicts "Grandma Poss using bush magic".

The coin has been continued into 2020 but with the new Jody Clark 6th Effigy. (See link)