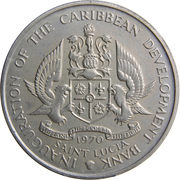 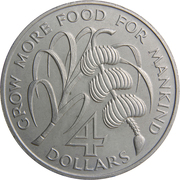 Inauguration of the Caribbean Development Bank

Coat of Arms of Saint Lucia

Lettering:
INAUGURATION OF THE CARIBBEAN DEVELOPEMENT BANK
THE LAND THE PEOPLE THE LIGHT
1970
SAINT LUCIA

Details of Coat of Arms of Saint Lucia
The ROSE   tells  about England's rule ( “mother” country whose national flower is the rose ).
The FLEUR-DE-LIS to indicate France rule over the nation as many as seven times.
The Bamboo is the national plant, two pieces form the cross of the shield.
The little AFRICAN STOOL in the centre to indicate African ancestors who were shipped  during the slave trade. Torch, to light  our way,
The Saint Lucian Parrot (Amazona versicolor) the  national bird guards each side of the Coat of Arms.
Motto “THE LAND, THE PEOPLE, THE LIGHT”, is printed at the bottom of the shield. ” 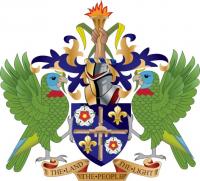 Members from this site want to exchange this coin: Essor Prof, muygrandeoso