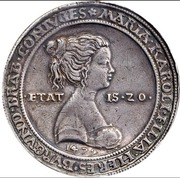 Young portrait of Maximilian I.

Young portrait of mary of Burgundy.

Struck after the death of Maximilian's second wife in 1510 in commemoration of his first wife, Maria of Burgundy, whom he had married in 1477.

Mary (Brussels, 13 February 1457 – Bruges, 27 March 1482), Duchess of Burgundy, reigned over many of the territories of the Duchy of Burgundy, now mainly in France and the Low Countries, from 1477 until her death. As the only child of Charles the Bold, Duke of Burgundy, and his wife Isabella of Bourbon, she inherited the duchy upon the death of her father in the Battle of Nancy on 5 January 1477. She married  Archduke Maximilian of Austria, the future Holy Roman Emperor Maximilian I Ghent on the 16 August 1477. Info Wiki.