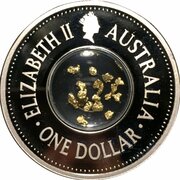 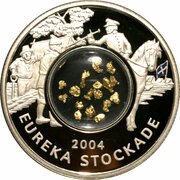 A scene from the uprising, with a small Eureka Flag highlighted in colour.

Issued by the Perth Mint in a wooden box with a hole to view the gold chips. Encapsulated gold nuggets set in the centre of the coin. 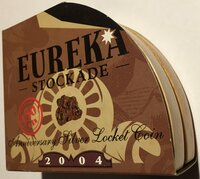 Bullion value: 24.05 USD Search tips
This value is given for information purpose only. It is based on a price of silver at 849 USD/kg. Numista does not buy or sell coins or metal.