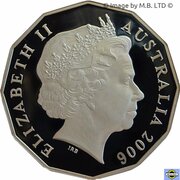 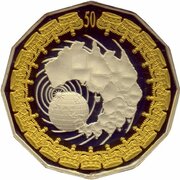 Images of Australia showing position on a globe surrounded by a ring of majestic crowns with a small 50 at the top. The outer ring of crowns is gilt with 24 carat gold.

Queen Elizabeth II celebrated her 80th birthday in 2006 with many special events and activities. In the month prior to her birthday on 21st April, she had traveled to Australia for a visit which included opening the Commonwealth Games in Melbourne. This coin is part of a two coin set issued by the Royal Australian Mint.
The coins were issued in a wooden case made from jarrah which was inside a protective purple box. 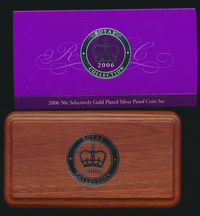 A Copper-nickel NCLT version of the coin was released in a coincard.

Bullion value: 15.52 USD Search tips
This value is given for information purpose only. It is based on a price of silver at 852 USD/kg. Numista does not buy or sell coins or metal.