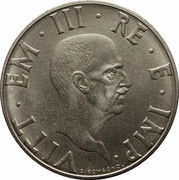 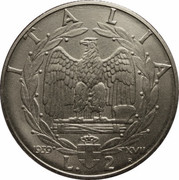 Head of King Vittorio Emanuele III facing right.
Below the neck the name of the engraver

Eagle with spread wings standing in profile on a beam adorned with the blade of an axe within a wreath of laurel branches. Where the branches meet together the Shield of Savoy divides the value, with the date on the left and the mint mark and the Fascist Era right.