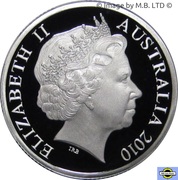 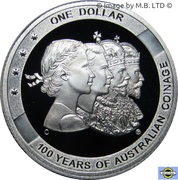 This Fine Silver Proof (.999) NCLT coin was released to commemorate 100 Years of Australian Coinage which commenced with the first Australian coins minted in 1910.

This Silver version of the coin was released at ANDA Shows in a plush dark blue square box  in most Australian Capital Cities with various Master Privymarks which had a small Kangaroo imposed over the top of the Privymark Letters, [B] [C] [M] [P] [S].

The coin was also issued for general sale in a  Yellow box  with just a plain "C" Mintmark.

Bullion value: 6.78 USD Search tips
This value is given for information purpose only. It is based on a price of silver at 582 USD/kg. Numista does not buy or sell coins or metal.