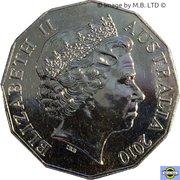 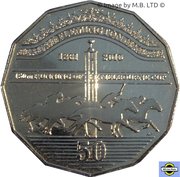 150th Running of the Melbourne Cup

Released by the RAM to Commemorate the 150th running of the Melbourne Cup horse race at Flemington is this NCLT 50 cent coin which was issued in a coincard.

The design of this coin commemorates the 150th running of the prestigious Melbourne Cup annual horse race which first ran in 1861. The race in Australia is held on the first Tuesday each November. All around the country many Australians stop work to watch the race.

The coin was also released in a PNC by Australia Post (15,000 Copies)

A special ballot was held to issue 1,861 copies of the PNC with a special Gold Postmark.