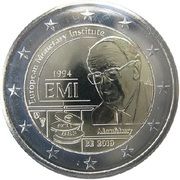 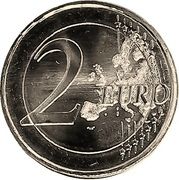 The inner part of the piece depicts the portrait Alexandre Lamfalussy, the first president of the
EMI, on the right with his name below. On the left-hand side, the abbreviation EMI stands central with the year 1994 above,
referring to date of the establishment of the Institute and the designation of Lamfalussy as its first president. Below ‘EMI’,
several coins are depicted falling on each other with the inscription €, ‘ECU’ and ‘BEF’ from top to bottom. Given the fact that
this is a Belgian issuance, we have chosen for ‘BEF’, the abbreviation of our former national currency. The purpose of this
representation is to symbolise the transition of the national currencies to an European single currency, the euro as the EMI’s
main focus was on establishing the European System of Central Banks, including the ECB and the new currency On the
upper part of the left side of the coin is an inscription ‘European Monetary Institute’.
As the Royal Dutch Mint will strike the coins, the mintmark of Utrecht, a mercury staff is located on the left with the Belgian
mint director mintmark, the coat of arms of the municipality Herzele. The country code BE and the year mark 2019 are
located on the bottom. The initials LL referring to the designer of the coin, Mr Luc Luycx, are inscribed on the right.
The coin’s outer ring depicts the 12 stars of the European flag.European Monetary